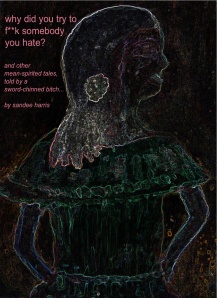 Me:  Get outta here!

Little Brother:  I can stay in here!

Fast forward to 1989, walking down 9th Avenue, Manhattan.  I tell my boyfriend the tale.

“I used to be skinny with a sharp chin.  So my brother — we had a fight.  He calls me a Sword-Chin Bitch.”

1991, hanging with my good friend B.  To break the monotony of post coital cigarette smoking I recount the story.

“And do you know what he called me?”

“Nah baby what he call you?”

Years later, old as shit, I come up with the idea of marketing my homemade book.

Ah, lets see, my sister says I need a blog.  She says I need to get on that gaddam facebook, and I need a catch.

Got it — I’ll name my book Why Did You Try to Fuck Somebody You Hate, and Other Mean-Spirited Tales, Told by a Sword-Chin Bitch.  It’ll be like, like — Monty Python!

B. thought Sword-Chin Bitch was hilarious – my ex thought so too.  And I’d be giving my brother a shout out.

But I can’t say Sword-Chin – it ain’t grammatically correct.  Gotta hyphenate, make it Chinned.  I’m selling a book.  It gotta be right.

Responding to the prompt for a handle on Word Press, Sword-Chinned Bitch, no-brainer.

Months later, thwarted by my own guerilla marketing ploy with that long ass book title, I change it to Mean-Spirited Tales, but keep the Sword-Chinned Bitch handle, to the dismay of a few.

Now you see the origin of my name.  I’m the antithesis of a bitch and strive to be evolved when confronted by bitches.  My handle doesn’t mean that I endorse bitches, beeotches, or sons of bitches.  Some were put off by my Sword-Chinned Bitch head appearing in their posts.  I don’t know, should I follow her back?  She might be mean, you said.  But I assure you that I am kind, loving, and do not consider bitchiness an attribute.