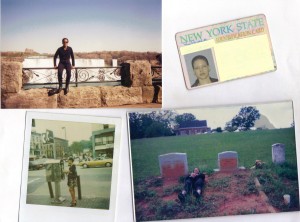 This Luddite figured out how to scan pictures into her computer – watch out now!  Oh God what’s next?  Maybe I’ll use my stagnating twitter account.

Yes they are low quality images, but you don’t mind because you understand that I am handicapped when it comes to technology.  These pictures go back between 7 and 17 years ago.  The ones on the left are a montage that I sent with my manuscript a while back because I was too cheap to spend money on a head shot — no that’s a lie — I didn’t have any goddamned money!   It might have been a mistake to send them this.   I’m quite sure it’s why they didn’t publish my work.

At the top left is me as Roy Orbison at Niagara Falls – we had a kick-ass time!  I wore those clothes everyday.

The NY State ID will be renewed in two years.  By that time, I’ll have an old lady picture to replace it.  Shit, I thought I was old then.  Bahaha!  Fuck that!  I’ll be 50 in November and I’m damn proud to be a woman of a certain age.  Bahaha!

At the bottom left is a Polaroid taken by a man on 125th Street in Harlem.  The motherfucker just started snapping pictures of me out of the blue.  I told him to hand them over as I didn’t want my head photo shopped onto a naked body.

Me Mummy took the picture of me at bottom right in the family graveyard in Cross roads Virginia.  I’m between Grandma Z and her sister Auntie Connie.  I’d like to get my filmmaker brother out there to do a zombie movie with me as the star zombie.  It’s creepy around those parts.