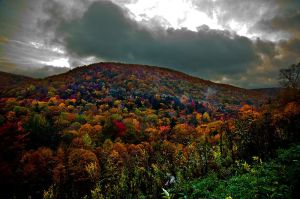 An overcast day only hinting of sun suits my mood.  I like taking walks in it.  When dusty clouds tinged with peach, pink, turquoise and orange hover, my thoughts are romantic.  Pathetically I imagine living in that old gothic building jutting over the Hudson, or have a cotton-headed fantasy about the preference bestowed upon me by the universe, wherein hordes of lovely people who like my books buttress my existence with praise and favor in all manner, form and “activity.”

The texture of clouds and colors on these days are the canvas for the depths of my thoughts and for the melancholy hue of self-indulgence.  I’m not afraid to allow myself to be seen, to reveal myself in this atmosphere, and can discuss with myself, out loud – if walking on a quiet road — how to handle an ongoing conflict with the obese service worker, or the blatant truth about the direction of my life, or the spiritual benefit of never blaming anyone other than myself.

Centuries old artists capture the beauty of the powdery, melancholy sky as a palette against the flora or peasant’s valley.  As a transporting exercise in recreation, I imagine the woods across the street against a pastel textured, dark-hued sky a hundred and fifty years past.

I prefer this to the harassment and shock of a sheer blue day.  The demand, the brightness shining on every flaw of my life are too much for me to endure at times.  The intrusion is audacious — it embodies the collective idea that it’s the perfection of days and that I should be impelled to romp about in it to serve my health.

What crap is this?  The sun burning my eyes, my chest clenched with the weight of all this expectation.  Bah.  My name is Sandee, and I’m not a great fan of the overbearing sun.

An excerpt from Xero Tolerance, by Peter Steele — a song about unrequited love:

I got a pickax in the trunk of my car

There’s an ugly green monster in my head

I left out verses in between.  For those who dare – have a lovely listen to the madness below.  But you gotta pump it up – tee hee!  He filled me with the fuel I needed to continue to exist, the early Peter Steele, more than the latter.  I don’t begrudge him for the later things that he did.

I did hate the song that he wrote with a girl named Tawana on welfare.  The song has a German name, for let’s just say the underclass, which has horrible horrible implications – don’t worry, I wrote him a nice letter about it.  At the end of that letter, on the other side of the page I told him to ‘kiss my black ass’.  I wrote it to take up the entire second page.

He wrote me back!  Said my letter was intelligent and that I had great taste in music– my baby was so fucking funny!  His humor surfaced also in his covers of sugary sweet songs from the seventies that he sang in a deep growly voice.

He was darkly humorous.  He said he was misunderstood – people thought he was a neo nazi, people missed the twisted humor of his songs, which were often taken literally. One of his band mates was Jewish.  When I read a very positive review of his album in the Voice, it helped me feel comfortable listening to him because the writer was a woman — he wrote a song which could easily be taken as an offense to women that I absolutely get and love.  He said he was happy that I ‘got him’.

In his letter, he told me he’d slip me some tickets.  I think he said that I should contact him back.  So I wrote him with my phone number.  I came home from work and my telephone rang.  “Can I speak to Sandee Harris please,” the heavy voice said.  I knew who it was.  HE FUCKING CALLED ME!  WE TALKED FOR TWO GLORIOUS HOURS!  From that point on he was mine!

I have three of his albums, but I only listen to Retaliation from when he was with Carnivore, and Slow, Deep and Hard, the album that he made with Type-O-Negative. Peter has helped me over and over, to rage, rage against the metaphorical dying of the light, against an existence predetermined by somebody else.

This morning I listened to Xero Tolerance for inspiration.  The lyrics pulsed through my head during my morning jog:  ‘I’ll kill you toniiiiiiight, I’ll fuckin’ kill youuuu!’  Yeah, I was mad about existence or something like that.  (Hey I do listen to lovey dovey coo coo music too every now and again.)

He was the Gothic Prince that I would ultimately gravitate to in my exploration of darkness (not really a bad negative thing, really).  How do you pay tribute to a man who writes a song called Unsuccessfully Coping with the Natural Beauty of Infidelity? You entitle a collection of stories – and this isn’t a plug, really, otherwise I’d tell you to go out and buy the damn thing — Why Did You Try to Fuck Somebody You Hate?  And Other Mean-Spirited Tales, Told by a Sword-Chinned Bitch.