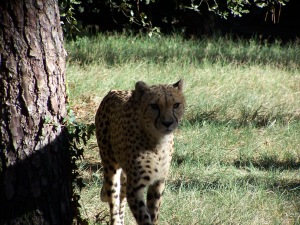 I’m a brown-skinned black woman with kinky hair, but people have told me that I look like white women.  It’s weird.  Years ago in a salon, a woman pointed at a white model in Vogue.  “You look like her,” she said.  The model wore a grey fur vest, a fur hat and Cossack boots – she had her foot up on a stoop.  Odd, but I saw it.

Once a woman squinted and said, “I know this is weird, but you look like this white woman on As the World Turns.”  At least she knew it was weird.

People have said that I look like black women too.  Imagine that.

Someone said that I looked like Pam Grier.  For those who know her, look at that picture and take two guesses why I don’t look like no Pam Grier.

My mom says I look like Halle Berry.  But she’s my mom, so we’ll let that one slide.  Aside from that body, I don’t think she’s all that anyway.

Years ago people said that I looked like Shari Belafonte.  My dentist thought so.  “Shari Belafonte with bad teeth, huh,” I said.  He didn’t think it was funny.  Maybe he thought I insulted his dental work?

Way back my boyfriend approached, pointing — “Know what you look like?  An a-cheetah!”  What did he know from cheetahs living in the city?  I was also momentarily stunned because he had said, do you know “what” you look like.  Two other guys also said that I looked like a cheetah, but said it correctly.

I have moles all over my face and a round head?  I move like a cheetah?

I could see Shari Belafonte and the cheetah right off the bat.

But I prefer looking like a cheetah, because when you look like a celebrity you’re relegated to being mini-me.  You’re an ersatz version of them.

I saw a stuffed cheetah at the Museum of Natural History.  That place seems so dusty and old – old in a bad way, like there’s still asbestos padding the walls.  I stared at the cheetah for a while.  I imagined patting that cheetah and clouds of dust coming out of it.

What creatures of the wild kingdom do you resemble? 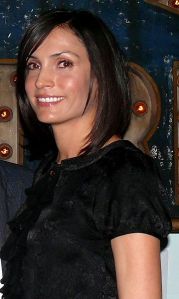 I helped make somebody a Hollywood Star.  And yet I live, ever so humbly.  I wrote a play in college in’91 and handpicked three people from my class to star in it.  They didn’t act on stage, just read the script in a workshop.  I don’t even remember the name of it — but still!  I only just remember that one of the characters was insane — of course.

After starring in my blockbuster play, Famke Janssen developed a very successful movie career for which I totally take credit.  I had no idea then that she was getting into acting.  I saw her on the big screen for the first time in the X-Men.  “My protégé!” I cried, pointing at the screen.

Famke was nice.  I liked Famke, but Famke never gave me credit for catapulting her to success.  Famke hasn’t thanked me.

If her ship starts sinking and mine begins doing whatever it is that ships do when they sail very well, would I offer her a lifeboat?  Of course I’d offer her a lifeboat – I molded her career for goodness sake – remember in the World of Suzie Wong, Suzie Wong she kept saying this – in that cute Chinese accent — “For goodness sake!”  What a racist movie, but for the life of me I just love saying that.  Nancy Kwan rules!

Really, I don’t think Famke Janssen’s ship would sink and would never wish for it to sink.

What celebrity encounters have you had?  Do you know Famke Janssen?

When my friend Jeff lived on Fourteenth Street in the eighties it was sleazy. He lived in an SRO, a three story walk up. I went there once and we smoked a lot of cigarettes. He introduced me to Charles Bukowski, underground comic books and OTB.  He wrote me a poem that had the word ‘equatorial’ in it. Sometimes he was called Angry Jeff. Fourteenth Street isn’t what it was years ago. But nothing is what it was years ago — silly me.

Now there are modeling agencies in that region so there are gorgeous people parading up and down that street. Union Square is there with that farmer’s market everyone loves. Whole Foods is there and DSW. I like to go to that Halloween store on 10th St. Today I went looking for green spider webs and purple candles.

When I left I walked across Fourteenth Street to the west side. There were so many people sucking at the air. You had to scoot and slide to get around them all. Oh my — I’m glad I didn’t breed. There isn’t enough air. Some of the people didn’t look happy to be here. I always say I wouldn’t want to create another lost soul. There are just so goddamned many people and a lot of them are populated here – oh I know there’s China but – good lawd!

What are all of us doing here? I suppose we buy things, use energy. Some of us think we’re special but if we thought about how many of us exist, maybe we’d change our minds. How could so many of us be special when there are so many of us?  It’s like bugs.

So I get it — generally, people have to be here to make stuff for others to buy and use. That’s it. In other parts of the world they have different notions but the idea of having stuff even in those places is seductive. The ‘good life’ is pushed on us like heroin. A lot of people imagine they’re here looking for something better or to be a part of some phenomenal movement that they’re going to start and they think their kid’s gonna help. Maybe. But like I always say, maybe the earth is just toilet paper for us to wipe our asses with until it’s all gone.

I never wanted to spawn.  I have baby’s fathers though.  They’re men I’d be biologically compelled to spawn with:  Jimi Hendrix, Patrice Lumumba, Andre 3000, Nat Turner, D’Angelo…  Forrest Whitaker used to be one but he married a woman who’s too pretty.  He should’ve married a regular-looking sister like the president, to show he has character.  (I’m just jealous.)  Malcolm X can’t be on my list because I respect the marriage that he had – he was righteous!  Of course there is Peter Steele, Rod Serling, Charles Bukowski, Clark Gable and Bill Clinton.  I didn’t mean to list the blacks with the blacks and whites with the whites, I swear!  My list is segregated – oh my!

My one now is Daniel Day Lewis.  I watched There Will be Blood again.  He plays Daniel Plainview in it.  I want to be Daniel Plainview for Halloween.  He’s the meanest, well, besides Nurse Rached.

Shianwrites wrote a cool post on catch phrases.  You should check it out!  To follow-up, here are really mean Mr. Plainview catch phrases, including one video:

–  “I can’t keep doing this on my own with these…people.”  He says it like people are roaches!

–  He’s drunk, collapsed, sitting on the floor after beating the simpy minster to death.  His servant comes to witness the bloody scene, and Daniel Plainview yells:  “I’m finished!”  Then the dramatic staccato Brahms’ Violin Concerto in D Major plays – it’s so cool and dramatic!

– “Draaaaaaaaainage!  I drink YOUR milkshake!”  Check it out:

Dainiel Day Lewis is a great actor.  I include fictitious characters on my list of baby fawvas too, so Daniel Plainview would normally be on there, but I don’t know if it would work because he hates people.  He’d have to screw me with a bag over my head and through a hole in the sheet — and I’d gladly have him with his mean ass!

I thought that calling my book ‘Why Did You Try to Fuck Somebody You Hate?  And Other Mean-Spirited Tales, told by a Sword-Chinned Bitch’ was Monty Pythonesque!  But apparently, some people feel like they’re being attacked when they look at the title.  “Ohhh, the world’s harsh as it is, why would I want to read that?  Wah, wah!” This is what pussies say.  The caption says, “For those unafraid to look,” and everybodyknows  pussies are afraid to look.  Other people think that the title is crass and vulgar.  My word!

So I changed the gd title.  Well, actually only on my Goodreads ad and on my blog site.  The Amazon site will take 48 hours to change over to the ‘family friendly’ title, so you can wait until then to look if you’re too a-scared.  The stories aren’t really mean-spirited any way – skeevy, alcohol-drenched, and a bit macabre perhaps.  Just imagine Charles Bukowski as a black woman – no, no — Edgar Allan Poe as a black woman – no wait — Fyodor Doestoevsky as a black woman… okay, this is probably why people think it’s weird.  Oh, oh — and there’s cake in it, and an implied ménage trois, and cigarettes, and a stinky ‘ol ghost from Holland!  One of the stories, “Night Terrors” has been published in Calliope!  So take that up your crass and vulgar!

My book represents the highest caliber of literature – oh yes indeed it does.  I mention myself in the same vein as Bukowski.  But how do I classify my book really?  I don’t.  To do so would be confining it to a box.  My shit can’t be labeled.  And at the same time I say that it’s ‘literature’ generally, which classifies it in a sense but I’m not ridiculous about the whole thing, after all, we do need some words that we agree upon to represent something so that we can communicate — sillies!

I’ll tell you what other people said about my book later, but in the meantime, if you haven’t already done so, please click the book link on the sidebar to look at the lovely review of WDYTTFSYHAOMSTTBASCB, then go to the bank, take out .99, and buy a copy on Kindle.  I’m planning on getting hard copies at some point as well, so don’t fret non-Kindle users.  My sister suggests also that you send the .99 directly to me and I’ll forward you the Microsoft Word file by email!  No, please don’t do that.