I wanted to know what the song was from the Heineken commercial. I detected that the language was Italian, and that it was probably from the 1960s.

I imagined an Italian Ann Margret type, hair all over the head, hip gyrations, mini dress, heavy mascara – that sort of a thing – oh my god I want to sing this! Anyhow, I found the singer. Rita Pavone! Damn she’s so fucking cute I can’t take it. The opposite of what I expected. ~Swoon~ I tried deciphering the translated lyrics — something to do with soup and tomatoes and a revolution or somethingorother. ~Shrug~ Hope there’s no evil underlying meaning or anything like that ’cause I love this fucking song! Yay! Eeee-yahhh papapapapahhhhhh! 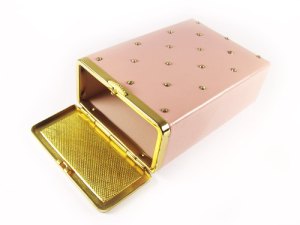 You are cordially invited to my 1960s “Les Baxter” party.  Yeah I know, I know — just work with me here…

When I was a kid this is what adulthood looked like to me.  I’m prompted by Twinkly Sparkles’ post on what it was like to be a kid in the 1960s imagining what being a grown up was like. My mom is light with long hair that she wore in the style of a lot of the white women on TV back then.  My dad and mom went to parties of my dad’s artist friends and there would be pictures.

My party is slightly based on that but mostly based on media images and a few of the dirty magazines I “happened” on back then.

So guys put on your smoking jackets.  Cigars and pipes welcome!  We won’t protest in self-righteous health-awareness.  You’ll get none of that “Oh my God that stinks!” at my party.  Girls – yeah I said it – GIRLS – this is pre “women’s liberation” era – bring your cigarette holders and pink-filtered cigarettes, but no lighters.  The boys at the party will eagerly light your cigarettes on the terrace overlooking the Hudson.  Black women, wear your newly liberating afros, but you have to wear head bands, mini–skirts and Nancy Sinatra go-go boots.  Wear your grooviest bouffants and pale peach-colored lipsticks – re-apply after eating the fondue.

This wasn’t the sixties but I’m going to play it at my party:

We actually had this album at home:

I have to watch Bunny Lake is Missing again.  I’m not getting something.

You’re having an incestuous relationship with your brother with whom you live.  Your kid goes missing.  This brother never liked that she existed because she comes between the two of you.  Some guy got you pregnant and you never married him — in the 1960s (movie version).  Scandal!

Anyway, how did you not know that your brother was an insane psychopath all these years when you finally discover that he kidnapped your kid and hid her in the trunk of the car?  Did he have a nervous break-down after working as a journalist?  How does someone so insane hold down a job like this?  Oh wait.  That’s a stupid question isn’t it?

Good God!  I wrote notes for this post but I can’t read them.  I wrote on the back of a print out of my medical follow-up appointments. I was in a hurry to meet my friend– let’s see what it says on there…inysprit byt clurs nrtin I’ve been in a time warp Buffalo Springfield  mew miu meia soul sixties garage music ivaautinnnng.

Got it?  What it might be saying is that for the last couple of days I have lived in a 1960s time-warp, far away from the misery of now as I can be.  That future that I fantasized when I was a child back then never materialized, except for the fantasy about being able to eat whatever the fuck I want for dinner, like cakes and strudels.

Now I am a girl in the 1960s wearing pleather go go boots and a hippy vest.  Listen to the sixties garage music.  Listen to the music of your grandparents, who were much cooler than you:

The voice of this singer reminds me a little of Neil Sedaka: 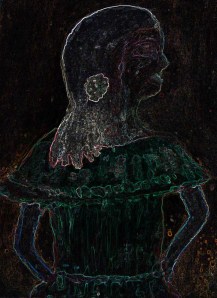 I’m at my sister’s.  She has a four year old and a one year old.  She has all the sockets covered.  I think she could do a lot more to child proof the house — enclose both children in a plastic bubble like in the movie — I’m totally neurotic and would do this if I had kids.  That’s why I don’t have any — no that’s not why I don’t have any.  I never wanted any because I just never cared to be a mother. Period. It’s too hard, with covering up sockets and what not.

In the 1960s we didn’t have all this awareness and consciousness about this and such.  You’ve seen those funny little pieces about how the kids of yore didn’t have child seats in cars or bike helmets, etc.  My mother was having a shindig in the living room back in the 60s and I waddled back into my room and plugged the socket with one of her huge black bobby pins.  She happened to be walking down the hall and saw me as I just recovered from the shock of my life.  What did she do?  Probably just pat me on the head before lighting up a another cigarette and smoking up the entire apartment with her friends.  Yep, she smoked, like a chimney when I was growing up.  My brother and I didn’t have asthma either — I’m not saying this was okay.  Just saying.