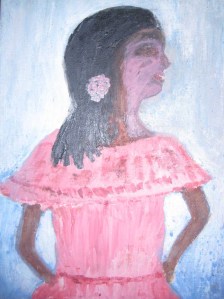 I’m wiser in maturity.  I respect people and I’m community-minded.

I took my Halloween decorations off my door yesterday, to respect the people celebrating Xmas.  I want to show respect to the neighbors who have a wreath on their door opposite mine.  I didn’t give a hoot about stuff like this before.

Since my namesake hurricane came this year around Halloween I didn’t celebrate properly.  But it just felt plain rude, keeping the gravestone on my door, intruding on their holiday.  My holiday is gone now.  I need to get over it.  That’s maturity.

A few years ago, I left the Halloween ghoul on my door through Xmas, but made it season ‘appropriate’.   I cut a thought bubble out in white paper and wrote “Merry Xmas!” on it.  I attached it to the ghoul’s mouth like he was saying it.  Get it?  I merged two holidays!

Though, everyone knows I’m the ‘lovable’ freak on the top floor, the kindly spinster who ought to have eight cats but for some reason doesn’t.  They accept that I leave my Halloween decorations up until I officially feel Halloween’s over.

One year it ended in April.  But I try taking them down sooner now because Halloween is anticlimactic when you take your decorations down from the last year in, let’s say, August only to put them right back up on October 10th.

So I’ll take down the Halloween decorations inside my apartment after Xmas, that is, if the world doesn’t end on Friday.  Oooo, I’ll bet there will be some slamming End-of-the-World parties on Friday.  I wasn’t invited to any of them so I’ll be celebrating Armageddon by myself this year.