The picture of my behind that my sister took when I visited looked just fine.

Here she is with her husband: 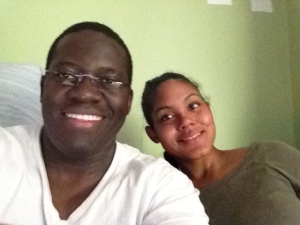 I wanted her to take one so that I could see how fat it was after eating different kinds of cake.  I said maybe I’d post a picture of it.  But since my butt looked fine I ate more cake.  I only wanted to post it if it was huge, to shame myself, in front of everybody.  So now I don’t have to show it to you.

But the real reason I won’t show it to you is because my hair was stone busted!  I wear an afro these days and I give afros a bad name in that butt picture.   I don’t want the people who read this who want afros to think that they all come out like that.

Here’s a better picture with one of my fake sons and me during the visit where you can’t see how busted my hair was:

Wait a cotton pickin’ minute!  How’d that get in there?!

[Deleted the picture of Steve Harvey dressed as woman holding ‘Steve Harvey’ baby with mustache — didn’t want to get sued.  Too bad you didn’t catch it earlier.  It was hilarious.]

Here it is now — this is me and both of my fake sons:

There wasn’t any cake there but there were cookies, Cheetos, popcorn, Fritos and ice cream.  I ate them because my sister’s husband bought them special for my visit.  I ate them instead of dinner.  I don’t like food anyway.  Food’s a burden.   I had fun there.

31 comments on “The Picture of My Behind”